In this part of my “probe hacking” series, I’ll explain how I connected a P7350 to my scope.

Hell, this sounds like I’m writing an unboxing post. But don’t worry. I’m way too cheap to buy this probe new and unbox it. So what I did was to go to eBay, and buy a broken P7350, in the hope I could repair it. Well, it didn’t work. The probe was already foobar when I got it, but I’ve learned important things about probes: First, all the high-frequency work happens directly inside the probe head. The probe box (“comp box”) just contains some DC and interface stuff. In this case, it contains an I2C-eeprom and some I2C-controllable DACs. I also learned that there is no point in trying to repair anything regarding the probe head. The way the head is assembled (it’s basically soldered in a tiny metal box enclosing the probe electronics from 4 sides) makes it impossible to even re-solder wires to the head, not to speak of soldering to the directly-bonded SiGe-based active element.

I ended up in buying another “broken” P7350 - this time verifying that the probe head was never damaged, never opened and never “repaired”. In total I’ve paid $1000 for the whole stuff (TPA-BNC, the active probe, the first, broken P7350 and the second P7350). That’s a real bargain so far - except that none of that stuff worked (yet; that was before fixing the TPA-BNC).

The biggest drawback with the P7350 by the way was that it was “totally incompatible” with my scope. It uses the TekConnect™ interface, yet another probe interface that’s used for the high-end probes. It uses a different mechanical interface, and the electrical interface looks similar to the TekProbe BNC (it has discrete supply voltages instead of a single 12V bulk supply) - a slightly wrong conclusion, as I’ll show later. Oh, and the new P7350 I’ve bought really had an undamaged probe head (I had to replace the tips, though), but a broken cable in the probe box - seems somebody pulled the cable, hard. Good thing that we intended to replace that connection anyway.

Since we couldn’t get a female TekConnect™ connector, therewefixedit. Ahem. It works fine.

Well, except that the scope would crash whenever we plugged in the frankenprobe. The reason for this, as it turned out, was the I2C content of the P7350.

So far, we got 3 different I2C dumpes:

Without understanding any of the actual contents, remarkable is that there are two totally different formats - let’s call it “old” (P6245) and “new” (P7350/TPA-BNC). The bottom line is: The P7350 I2C eeprom is incompatible with the TekProbe BNC interface - it’s more like the native (TekVPI) interface. So TekConnect is actually a mix between TekVPI and TekProbe BNC.

My brute-force approach was to just put the P6245 eeprom content on the P7350 eeprom. And voila - it worked!

USB 2.0 sync with a passive probe 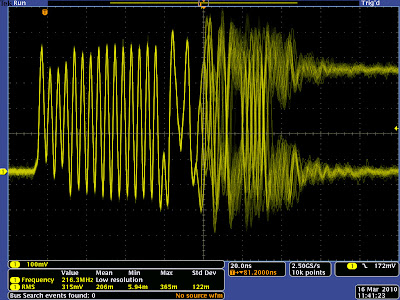 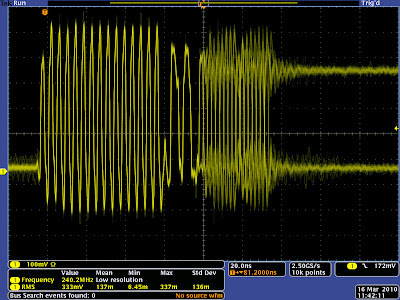 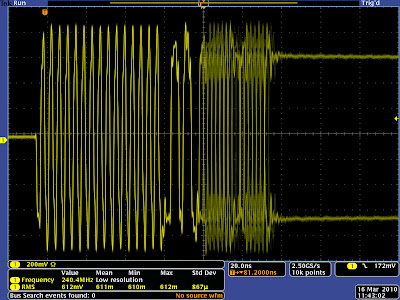