The 24c3 is over now, and we really had a lot of fun. We brought 6 of our Xboxes, which allowed us to grab attention from quite a lot of people in the hackcenter :). 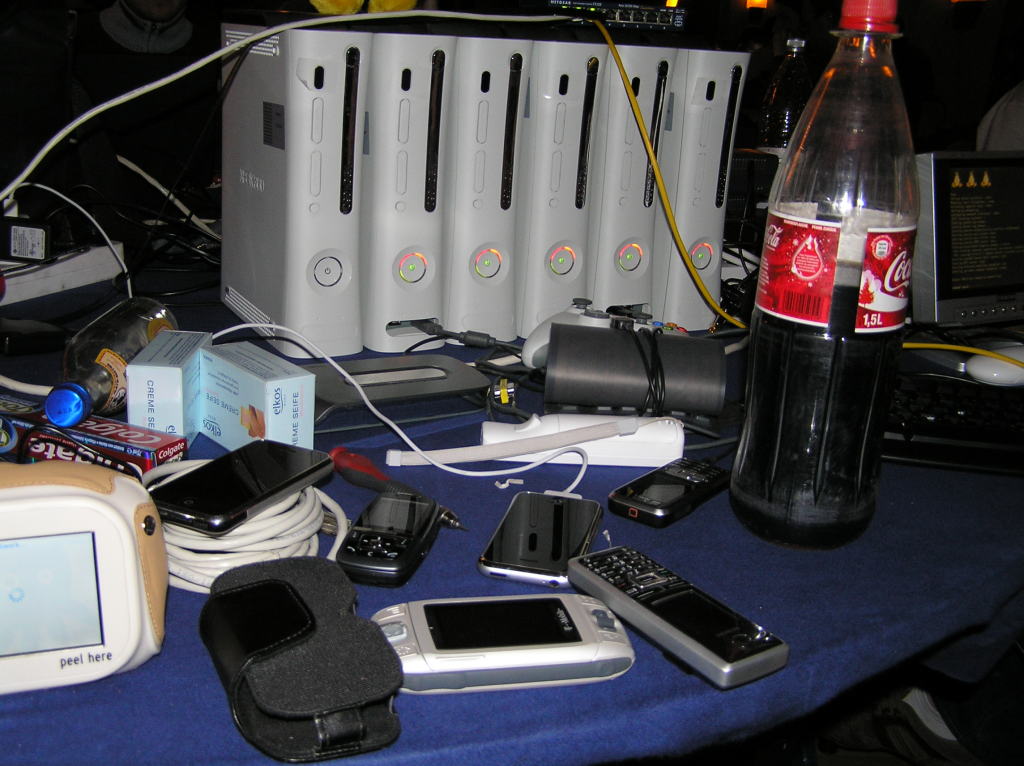 bushing showed a nice Wii hack we had been developing in the last few weeks (though I mostly did watch the show). Ben has been burning like 50 DVDs or so, which all did different things from doing nothing at all to immediately freezing the system, but like 30 min before our lecture, he made it working! Congrats again, as well as to the other people involved in this. We tried hacking together some SD loader stuff, but somehow it all turned out to be harder than expected, but it’s solvable - we have code running, and that’s the important thing, right? (On the technical side, it seems that the Wii has some kind of NX in place - or we might just be unlucky. I’m sure the next time will tell.)

bunnie was there too, and I could luckily buy a chumby from him (and a friend of mine), which are otherwise not yet available in non-US, mainly for regulatory reasons, as he told me. What should I say, I love the chumby! It’s something with a hell of nice details, starting from the packaging, over the chumby web interface to the chumby hardware itself. Ole and he had a hell of fun building a “device”, which consisted of a “random toy” bunnie bought in the local toy store, connected to a human with as much as 3 different wireless technologies - the steering itself was analog 27MHz FM, with an on-board chumby hacked to the remote control, which was controlled via WiFi. The video signal was transmitted using a DVB-T modulator. The whole thing was then controlled using a second chumby as a frontend, using the built-in accelerometers. 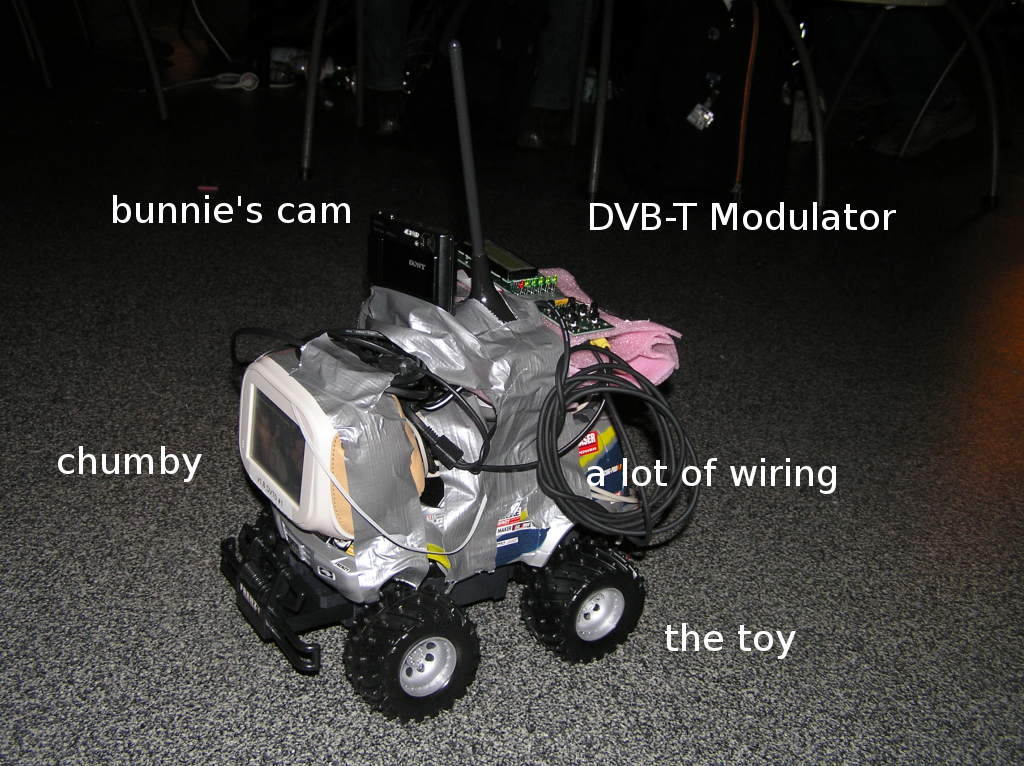 To visualize the DVB-T stream from the car, we used an el-cheapo DVB-T monitor, which Ole once grabbed from a local flee market. The thing itself is great, providing CVBS, VGA and DVB-T for a really low amount of space. Unfortunately we didn’t had a special low-latency firmware for the MPEG2-encoder, so the latency was like 1 second, which made it very hard to control the car. Also we sticked a flashlight to it, so we could see a bit more. 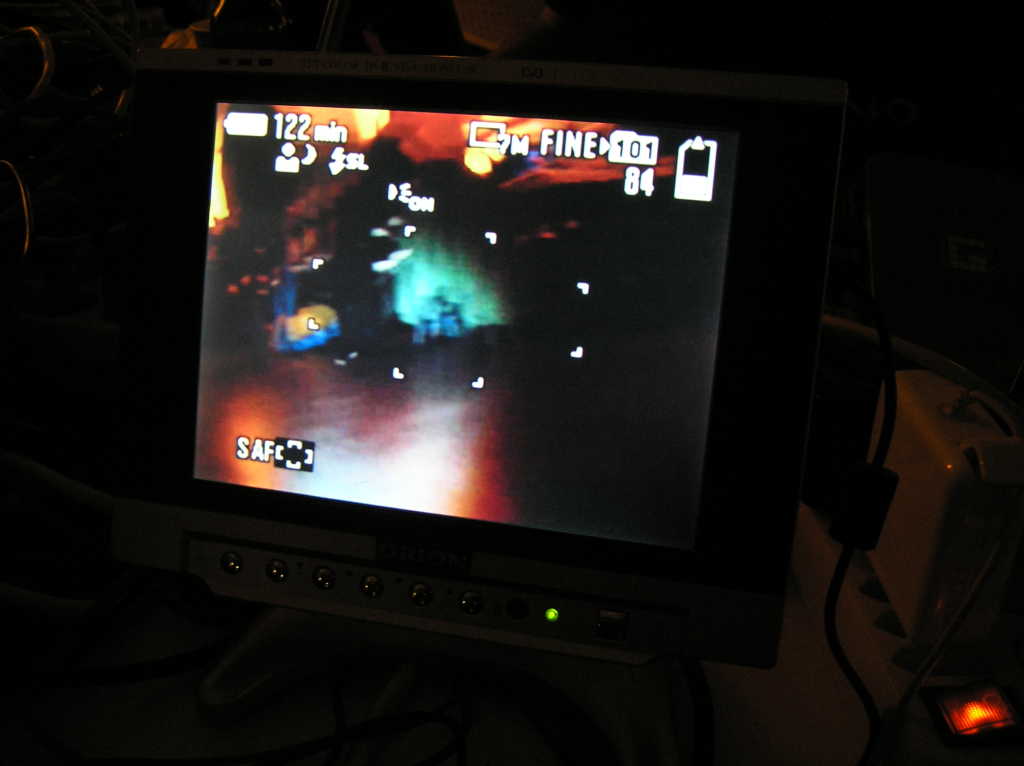 Speaking of accelerometers, axel, who already wrote the free60 X11 driver using a revolutionary (ok, let’s say: “interesting”) remote development method, started, together with Tom, hacking on a Xbox360 linux sound driver. The bad thing was that they had nothing more than a really short braindump of what I so far found out on the sound hardware (and that was really not much more than a list of registers associated with the sound). But some hours later, they had a first result: No sound, as we didn’t brought speakers with us, but we just hooked up a multimeter to the sound port, and whenever they would “trigger” the sound driver, the multimeter showed some activity!

Luckily it was (almost) daytime, so we just bought speakers (and more DVDs for Ben), and voilà: sound! It was something uncontrollable, but some time later we had some code which we estimated to output a plain sine wave. But somehow we screwed it up, and the output was an interesting piece of music, just not a simple sine wave. It was more like a basedrum, so I’ve hacked together some code to trigger that with two wiimotes. It’s still a mystery though why the expected sine wave was not showing up. On the other hand, it’s a mystery for me how they could bring the hardware to output anything at all! Thanks a lot, you two! I will soon provide Axel a skype link so you can continue developing remotely ;)

There were a couple of different other interesting lectures and projects, like mifare hacking (unfortunately I missed the first part of the presentation :/, but it was still very interesting), a nice overview about PSP hacking by tyranid, and countless other ones. Again I couldn’t watch as many as I wanted, because we had so much fun down there in the hackcenter.

Speaking of being busy, If you sent me a mail or IRC query in the last few days, and you’re expecting a response and haven’t yet got one, just sent me one again. I’m still practicing digital communication, and I it was just too much the last few days.